Today we mostly learned about patience; a good buddhist learning this one.

We had spent the evening at Nuwara Eliya at a larged rumpled dusty hotel that smelled of wood polish and disinfectant called St Andrews. We are in the heart of tea plantation country and the evidence of British settlement is everywhere. It’s odd, I feel  slightly resentful for the Sri Lankan people which is wrong as they seem pretty thrilled with all the tudor shit.

I wanted the boy to have an Asian train experience and the one from Nanu Oya to Ella is famous for the beauty and variety of landscape so that was the plan for the day.

The first thing he learned was that the trains run to their own programme and it doesn’t have much to do with the timetable. So the 1230 departure became 230 became 345. So there we were, on a train station platform in the bush waiting for a train.

These are the moments you go look where the fuck I am with my kid for gods sake! Then you go, jesus do we have enough food for him to not go into a low if this thing never comes??  Memories of Indian trains from twenty years ago don’t fill me with confidence.

The second thing he learned (that’s not entirely true, I think he was born knowing this) is that there is always someone new to play with if you approach it right. For Cody, a cute pair of Chinese lovebirds. For me, a handsome Israeli student. He’s going to come and visit us in New Zealand apparently. 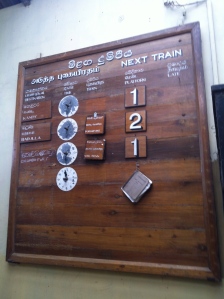