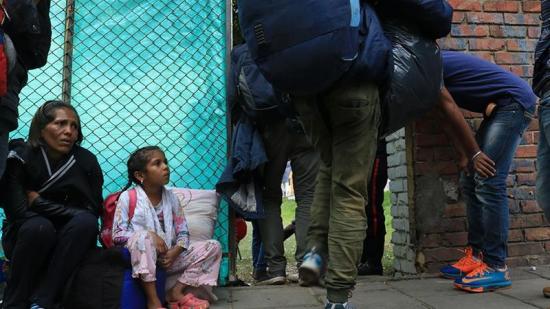 I’m catching a lot of public transport in Colombia. I’m shoulder to shoulder with the locals; I like it.

The first time I noticed it I thought someone was having a long one-sided convo on the phone with someone.

Then my local friend said “We have a situation here”.

A situation? That sounded a little heart stopping to me.

The situation he refers to is the crashing Venezuelan economy and the rush of people coming over to Colombia for refuge.  If must be bad for them, because it doesn’t look like it’s exactly working out here.

They catch the buses and loudly share their stories with the captive ears, concluding with a request for financial support. If they’re female and carrying a baby, it’s pretty hard to turn a blind eye.

But gee there’s a lot of them. Of the more than one million documented Venezuelans in Colombia, about 240,000 are in Bogota with more arriving daily. Many, fleeing their country’s crippling economy, violence, political persecution and food and medicine shortages, arrive in Colombia on foot without a peso in hand.

My friend tells me he has a criteria for who he gives money to. Basically he helps fund old people and people who are attempting to sell something.  I get that. You can’t give money to everyone so you create your own map to help you get through the tangled mess of emotions you feel.

Wish it were this easy for a homeless Venezuelan to navigate their way to true refuge.