January 6, 2019 By Jill Brinsdon in Uncategorized Leave a comment 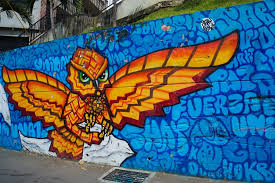 We know these stories of Colombia before we visit: Pedro and his cartel, the comunas with the gun-toting slum lords, cocaine on every street corner.

On announcing this trip to friends, the two primary responses I got involved either cocaine or my personal safety.

I’ve been in Medellín for the last few days, and I can report from the front line that the epicentre of Colombia’s violent history has moved on.

It was only 25 years ago Time magazine dubbed it ‘the most dangerous city on earth’. Even 10 years ago, violence  still reigned, civil society had been destroyed and no one seemed to know how to put the city back together again.

Now it’s becoming famous for one hundred other reasons; it’s public transport, parks and public places, the eco-árbol (a tree-like structure that acts as an air-purifier) and the spectacular Orquideorama for growing orchids. The street art is out of the world and its everywhere.

We stayed in a hip neighbourhood  El Poblado, in an achingly cool hotel and we were surrounded by  an incredible array of bars, clubs and restaurants.

The only problem was the food I’d eaten before I’d arrived. Too much meat for me.  My stomach was less than interested in keeping anything on the inside of my body for the duration of my time in this reinvented city, so it was nil by mouth for me.

Trust me to be the only girl left on the run in Medellín.