October 16, 2011 By Jill Brinsdon in Uncategorized Leave a comment 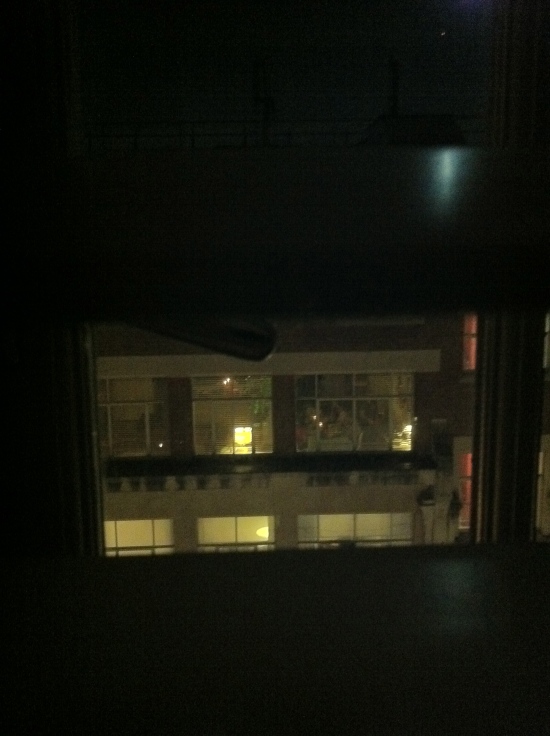 While I would never dream of spying on a soul at ground level, there is something entirely satisfying about watching someone from one tall building to another.  Hotels in particular are fair game don’t you think?

Perhaps it’s because everything seems so far from  real.Or perhaps  it’s the opposite of that – too many reality shows that make it okay to be a fly on the wall. Or perhaps the street and the flights of stairs and the assorted elevators mean if you get  caught staring  you are not exactly going to get chased across the grass by an angry man. Unless you’re role playing, you don’t really want a bar of that.

Between you and I, last night’s tableau was somewhat gorgeous and well worthy of a gawp. This was why  Stuart, Steve (a Londoner, a friend, and an important member of the Secret Royal Family) and I found ourselves at 6pm  sitting on the floor of my hotel room watching two beautiful men prepare a dinner party for six in a third floor belle magazine apartment across Dean Street.

“Gay” declared the gay man in the group. “So gay” said the other. “Look at the way he’s wiping down the bench. He’s spraying too close to the food. Do you think they’ve had a fight?” “Is that orange candelabra plastic? Why would you do that?” “It’s a fucking cool apartment though isn’t it. How much would that cost Steve?” “Is there just one chair by the tv or is there a couch there too?” “That is a healthy double income that is” “They both work out. White T shirt guy is massive” “Yeah, looks like Tarzan. Sounds like Jane”.

Oh we threw ourselves at it, sitting on our bums on the floor as we were, three heads and six shoulders all that was visible of our bitchy naughty entertaining badness.

Then white t shirt guy saw us. I admit I was slightly mortified. The boys weren’t . We waved at him. There was a beat and a confused slow wave back. Laugh? On our backs on the floor.

Behaving badly is such fun.