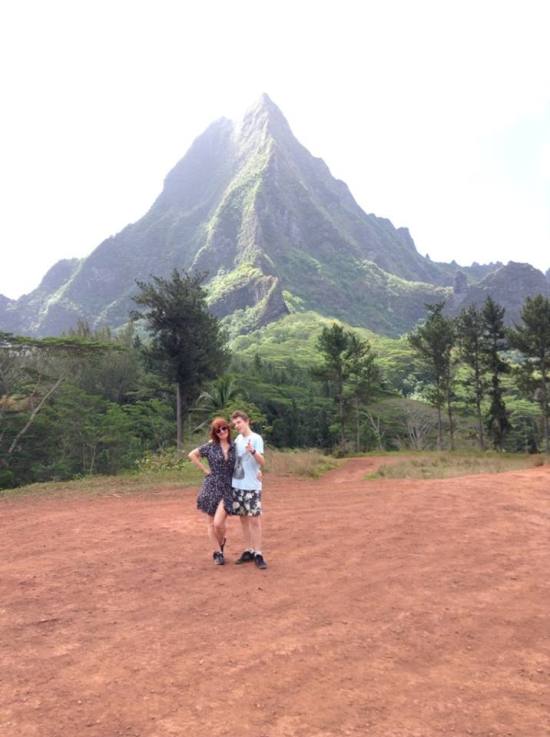 To better understand the island we are holidaying on, I chose a quad bike adventure for my boy and me today.  People get killed on them I know, but I figured Albert Tours wouldn’t have a business if they sent people home in boxes.

I’d driven one on a Bay of Islands shoot a couple of years ago; Cody had plenty of practice on his uncle’s farm down South. So off we went – two couples (one a creepy old Japanese daddy, young princess combination… the other a generic American pair), a guide (who was also a policeman and a fireman apparently) and Cody and me.

We were sharing a bike and I was driving… all the way till the dirt road starting resembling a Rainbow’s End ride. I stopped to gather my nerve, and slow my heart a little. Without a beat – I’ll drive mum.  So I slid back, and let my boy step up and into a new role with his mamma.

We were overland for three hours. Through a pineapple plantation, through the Opunohu Valley, all the way up to the summit of Mount Tohiea and back down again we tore it up. Correction – he tore it up. I just held on tight and grinned and wooped and exclaimed at the beautiful scenery.

About half way through our adventure we stopped at an Agricultural College where pineapple everything was for sale.  Cody tested his bloods, found he was high and had to say no to the fresh pineapple ice cream and just drink water instead. I could see the man wrestling with the boy. He knew high blood sugars affected his concentration so he had to deny himself. But it made him crazy mad. And it made me crazy sad that this was even his reality.

You think parenting is hard when your kids are little but intellectually it’s kind of easy. Keep them fed, keep them safe, keep them warm and dry. Letting them go is the hardest part of all. Throw in a life threatening condition and the stakes are even higher.

As mothers we are genetically programmed to hold our babies close. Then suddenly they’re fifteen and to do your job well you have to change your game and, finger by finger, release your grip and set them free.

Today I let another finger go and he rose to the occasion, both occasions actually, beautifully. Of course he did.

Of course he did.